Mandalay, Golden City was founded relatively recently in 1857 by King Mindon to coincide with an ancient Buddhist prophecy. Tradition has it that Gautama Buddha visited the sacred Mandalay Hill site, and proclaimed that on the 2400th anniversary of his death a metropolis of Buddhist teaching would be founded there. Upon completion of what was now the new Royal capital of Konboung, or Upper Myanmar, King Mindon moved his entire government and 150,000 people from nearby Amarapura. It was common in Burmese history to move capitals upon the ascension of a king. It was the last city to fall into the hands of the British invasion of 1885; and for this reason it still has great importance as a cultural centre. King Thibaw was reigning at the time, but after he handed Mandalay over to the British General Prendergast, both he and his queen went into self imposed exile. 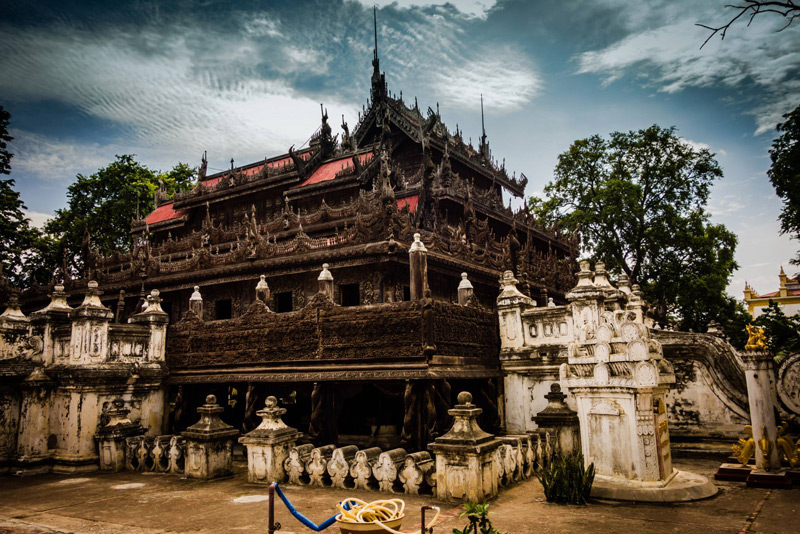 Once part of King Mindon’s palace, this wooden building was moved shortly after his death and converted into a monastery. It remains an impressive example of Burmese Teak crafting, and architecture. Today it is one of few such buildings surviving, as extensive bombing during WW II, destroyed most of Mandalay wooden buildings.

Mandalay is located on the central rice growing plains of the Upper Ayeyarwady area. About 600km north of Yangon, only 80 meters above sea level, on the banks of the 2000km long Ayeyarwady River. Mandalay is often dusty and quite hot, lacking the green swathe of shade synonymous with Yangon. However; to the Burmese it is Mandalay, not Yangon that is the true representative of Burmese life, history, culture and the centre of Buddhist learning. There is always something happening on the busy streets of the former Upper Burmese capital.

Mandalay is home to many famous places of interest: the Maha Muni Pagoda, the Atuma-shi Kyaung, the Mandalay Hill, U Bein Bridge, the Kutho-daw Pagoda, the Royal Palace, the Yankin Hill, the Zegyo Market, Amarapura, and Sagging.